Posted by: aigarius in debconf5, debian, photo 14 years, 12 months ago 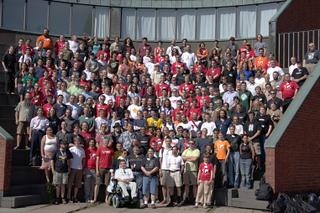 Here it is (Google sized down the picture, so I used p.d.o :()
Many thanks Arto Teräs fot taking the picture! There will be a version with an imagemap with names soonish.

Note how shy and unnoticable I am in the picture - the one in the yellow t-shirt, in the middle :D

Posted by: aigarius in debconf5, debian, photo 14 years, 12 months ago

This post is kindof a warm up before the comprehensible report about all activities of the June 13th, so this will have more pictures then usual, but less then the next :) 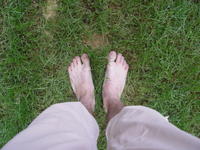 First of all I must note that I've been walking barefoot for most of the week and I must say that it feels really good, except for the really sharp stones. Walking on the grass feel especially good. 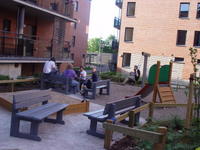 The other thing is how Debconf is not fully empthy even at 6 in the morning - you can see the dorm hacking area here has some people already awake (the people that were still awake, went to sleep half an hour ago). 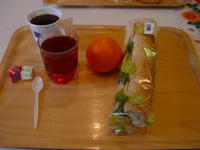 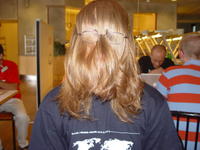 A breakfast is quite light around here, but if you are skillfull at maquerading, you can get a second serving :). (Note: the person in the photo is facing the camera)
Some obligatory photos of the speakers have been skipped this time - look at the group picture if you want to see how they look like. I will try to blog about the other things happening here - things that are not going to be available as HD video. 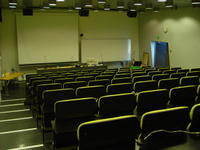 Here is the photo of the (currently empthy) second room where some of the talks are held. I went here for the presentation from the OpneOffice.org Debian Team. That sure sounds big. But it apears that there are only two people on the team and that feeling of having a big team is kind of hurting them. So - OOO@Debian *does* need your help. 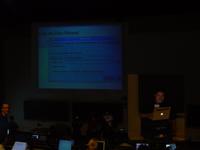 One other unconvential event is Branden jumping around and screaming "It did it again, you are my witness" and putting an obscure error message op on the big screen - you can see it here in all the glory. It seams that Mozilla screws up the type detection :) 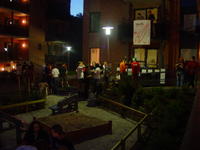 And even trough the daytrip is planned tomorrow morning, the fun still goes on far into the night.

The first thing I really noticed in the morning was that I missed the breakfast, again.
On the other hand this wall in the cafeteria caught my lens - this is a clock up in the air, aprox. 3-4 meters up from the floor. Now that you know, where it is, notice the power plugs ... I mean ... why??? 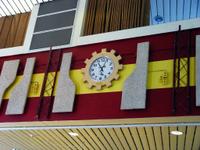 Soon after that I got the chance to play around with the new Nokia 770 toy. It really is a marvel - beautiful software, great hardware. You can see it here accessing the Slashdot over GPRS. 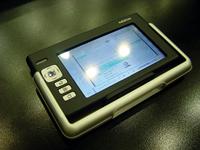 One of the talks I've been more interested in was the CDD talk by Andreas Tille (see my other blog entery about it): 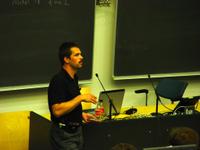 I didn't take many photos this day, so this one gets into top packages - this is the cafeteria full with Debian Developers over the dinner time. 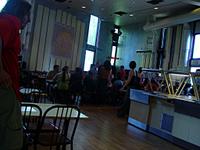 Soon after that I went to the dorm room to do some UI prototyping in Glade for my SoC project, but I was too tired and I had to go to sleep after a couple of hours.

This day is rich on pictures - 8 of them got in here, but that is a bit compensated by low number of photos tomorrow :)
Here is a photo of the cafeteria where all meal are served at the Debconf. It is not a bomb bunker. 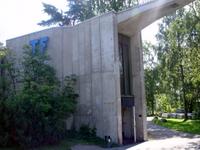 This is the breakfast of mine for the day. You might wonder - why does that look so much like a lunch? Because it is. I missed the breakfast and only woke up at lunch. Doh. 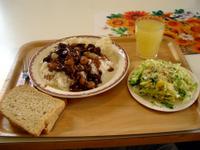 And the I arrived at the talks and the first thing that I see on the screen is ... 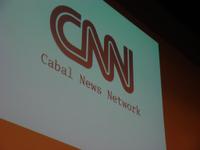 Branden followed that up with a detailed talk about man pages. You can now also see that debconf2x-man generates better man pages then the first version.

The talk by Enriko was also very interesting, but despite being a bit sleepy, he moved so fast all the time, that I have no usable picture of him :(
Going back to Smokki we went by 'the lost band':

Here is a very bad attempt of mine to make a panoramic photo of the Smokki hacklab:

Many people wondered, why the hacklab webcam vibrates while going right and left. Here you can see it: 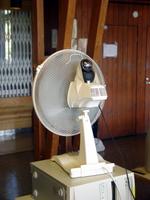 After the long hacking hours, many developers like to relax and have some kind of movement, for example like this:

Also sauna is an option. Today sauna was particulary good as it was finnaly turned up to 100 C, like I asked for the last two days :)

After some nice breakfast, the Debian Day started with an address from the leader. 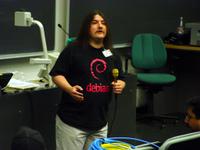 Jaldhar H. Vyas did a nice talk about the Debian in general, touching a lot of later subjects too - due to some technical problems, he had to go without his slides: 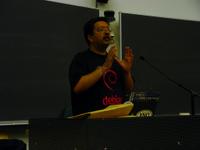 Then Gunnar Wolf did a talk about free software, where he also touched on the patent issues. After that my talk was up. While the video team was trying to get a nicer display of my presentation on the complex presentation system of the room, I introduced myself and noted my involvement with the swpat issues in EU. After the applause stopped, the hardware was ready and I could start with my talk. It went very well despite being prepared the night before - the CDD possible relationship with Ubuntu inspired some ideas that, I hope, will make Ubuntu into a kind of CDD.

Here is a picture of internals of the CS department building that the talks are happening in. You can see that the weather here is just perfect. 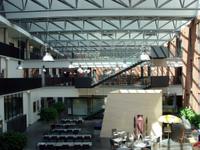 Alexander Schmehl's speach about involvement into Debian as an end-user was even more funny then expected because of repeated and different hardware failures of the presentation beamer control system and attempts of the video team to repair it. I didn't manage to get a clear picture of Alex banging his head against the blackboard, but this face expression of his is allmost as good, but see the video for the best effect. :D 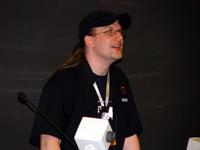 After that allmost all DDs went to the Smokki hacklab to do some hacking. Here we can see some GAIM hacking in progress :) 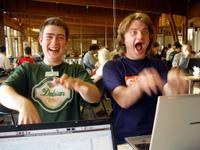 Later in the evening there was a great game of Ultimate (5 on 5). I was on the same team as Mark Shuttleworth and I participated in all scorings from our team, but the problem was that there was not too many of those. While we didn't keep the score (this game is very exhausting), our team definately lost :(. After that the Ultimate players occupied the sauna - Ultimate Sauna was that. It was quite fun despite the low temperature. No photos from there, again. :)

Let us try out a photoblogging format for the daily Debconf5 reportings.
I only arrived here yesterday and here is the schedule of the bus from the center of Helsinki to the campus region: 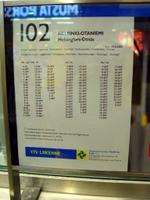 After following the many friendly signs, I arrived to the site and spotted the first developers: 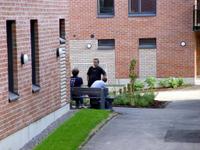 Some more were just around the corner: 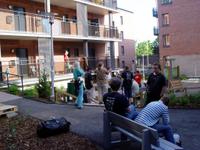 After trying to start the wireless according to several mystical HowTo's and giving up after two hours, I had to plug myself into the Ethernet jack in the dorm room and start working on the presentation for tomorrow. Actually I was not the only one doing that on the last night - developers are lazy :)

The night was long and funny 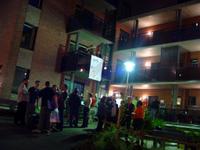 Around 70 developers were said to have arrived on this day 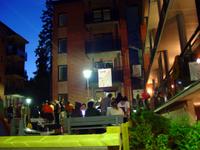 No photos from the dorm sauna, sorry :)

In the morning we only got up half an hour before the end of the breakfast - around 8:30.